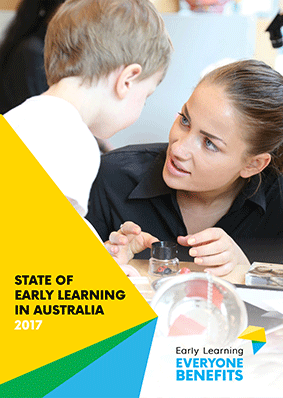 Early Educators, Child Care Services and leading voices in the early education sector have collaborated to produce a report which tracks progress across a range of different early childhood education and care (ECEC) outcome measures.

The report, compiled by the Early Learning Everyone Benefits campaign has shown that progress on early learning in Australia has stalled and action is needed to increase participation rates of three year olds, vulnerable and disadvantaged children.

Early Learning Everyone Benefits is a campaign which aims to inform Australians of the benefits of quality early learning for all children aged under five with a focus on the benefit to children, communities and the nation as a whole.

International studies show when children attend early learning they are more likely to succeed at school, become more skilled, and have better social and emotional outcomes while vulnerable children who get a good start to their education can develop the expertise and skills to become productive members of the workforce and contribute to society.

All of this contributes to reducing long term social costs and increasing benefits to the whole society.